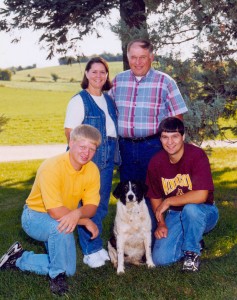 The Anderson family farm, affectionately called Idle Acres, was first settled in 1871 by Sven and Christina Anderson. They were Swedish farmers who immigrated to America in search for a better life for their family. Over 140 years later, this Century farm is supporting its fifth generation (going on six). This history is why we believe so strongly in the conservation of our soils for the next generation, and the preservation of the family farmer is essential. It’s also why we’ve spent generations focused on raising quality forages. While we do raise other crops for rotation, we love alfalfa for its benefits to the environment and animal health. It significantly reduces soil erosion over traditional row crops and minimizes soil work in the Spring and Fall since our alfalfa stands last five to eight years. Alfalfa naturally replenishes various nutrients to the soil, and is an important habitat for many organisms. In fact, local bee keepers rely on our alfalfa fields, which are allowed to go to full-bloom, to feed their honey bees.

After he finished his degree in Veterinary Medicine at the University of Minnesota in 1973, Dr. Harlan Anderson went on to practice Veterinary Medicine in the central Minnesota area. During this time, he found the majority of the health problems in horses were a result of nutritional mistakes. He realized that often today’s horse owner is not a life-long farmer, trained their whole lives in the area of animal husbandry. Additionally, today’s horses are owned for recreational riding or for racing, but not for the grueling field work they were once needed to do. Unfortunately, the need for equine nutrition information, for decades, has been filled by large grain companies who, naturally, are trying to maximize their market share. He also found the feed sales person was trying to balance the horse’s diet without knowing the nutritional value of the forage the owner was feeding.

Similarly, the hay supplier was often advising what forages the owner needed without knowing what other supplements the owner was feeding the horse. All of this made Dr. Anderson realize there was a desperate need for a nutritionally balanced, complete feed – much like what he saw revolutionize the dog and cat food market. 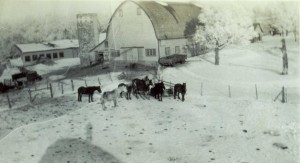 A recent photo of Idle Acres In 1929, a tornado destroyed everything but a shed and the two houses on the farm. The rebuilding began the next day. 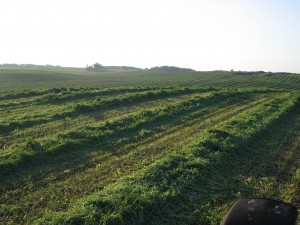 A beautiful day for making hay in the neighborhood 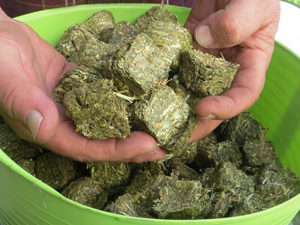 After decades of product development, and years of research at multiple universities, our family is excited to be able to offer you the Square Meal Feeds family of products. Square Meal is a “Total Mixed Ration.” Soft, palatable, roughly 1.25-inch square “biscuits” of Square Meal contain mostly forage – high-quality alfalfa and grasses – combined with minerals and vitamins. As the name implies, it’s a complete diet for the horse when combined with plenty of fresh water and free choice loose salt.

Please explore the rest of our website to learn more about our products, their benefits, and where to you can buy them.

The Anderson family reunion for the 140th anniversary of settling on the farm in Cokato, MN